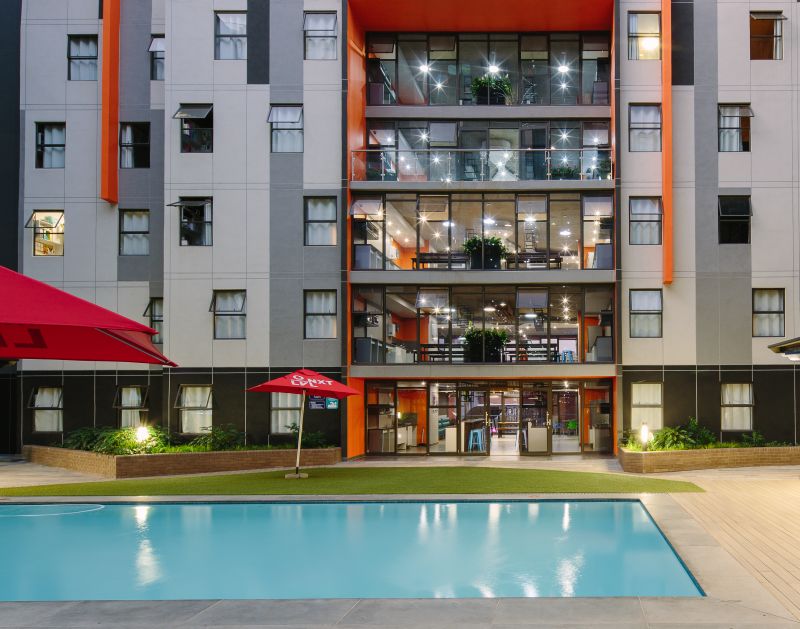 Imagine this . . . a breath-taking student village with every possible facility available, all inclusive. The architecture and design are key factors, but the products specified are one of a kind and some have never been installed before.

This was a mammoth task that took three years to complete and they achieved it seamlessly.
Antoinette Kloppers, a Senior Project Architectural Technologist at Paragon Group, guided us through this new development. It is easy to miss the finer details, but she quickly explains the reason behind every single object, space or material used. 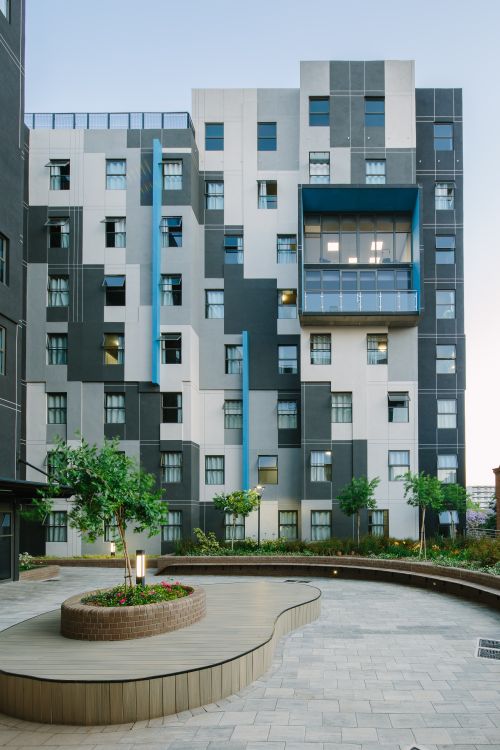 The different blocks have been designed in such a manner that students can comfortably walk from one block to the other, thereby creating a village and sense of community.

The capability of well-planned and contextualised architecture to rejuvenate an urban area is simply demonstrated by the Hatfield Square mixed-use student accommodation in Pretoria, designed by the Paragon Group for owners and developers Respublica and Redefine.

Catering for 2 200 students in a variety of unit types, Respublica Student Living manages the development. It extends over 51 000m² (excluding basement levels), with 3 500m² of retail space and a mixture of restaurants and line shops facing Burnett Street. Since the completion of Block D facing Prospect Street, the final phase of the project, there has been a marked revival in the once run-down area.

Kloppers believes its success lies in the fact that the entire precinct was designed with a strong sense of community and pedestrianisation in mind. “We decided to reconfigure the area entirely, creating a multifunctional space where students could live and play in a vibrant village-like setting,” Kloppers explains. 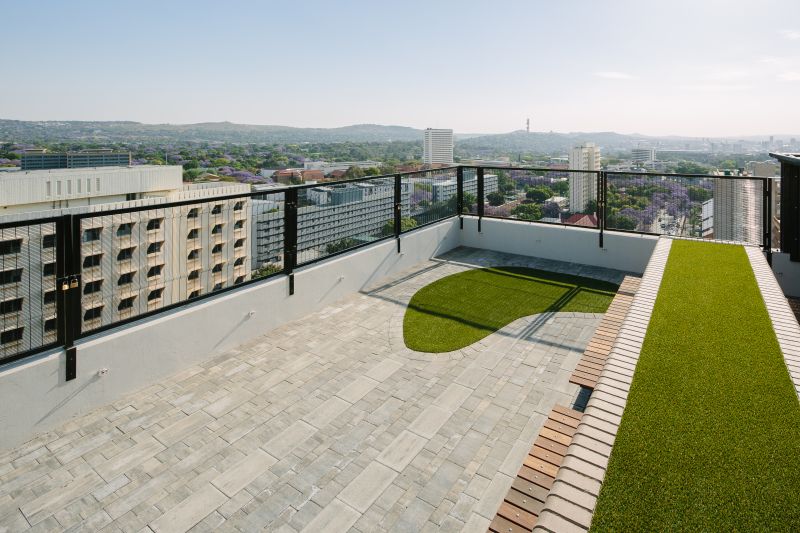 The breathtaking views whilst relaxing on the balconies provided once again encourages collaboration between students and relaxation spots throughout the buildings.

Walls & Roofs was fortunate enough to be shown all the functional residential blocks and what they offer. The colour selection of each block is unique and promotes individuality and wayfinding throughout the village setting. The monochrome tartan grid of the majority of the façade is juxtaposed with colourful pop outs and fins on the façade designating each neighbourhood in green, orange, blue and yellow.

As Kloppers talks about community, it is easy to see what she means. The roof garden spaces and other areas offer braai facilities, a gym with a running track, recreational areas in every block and open-plan kitchens on every floor that encourage community living between students. All communal spaces are connected through double volumes with either hammocks where students can lie down and read a book or a slide that takes you from one level down to the next level. The connectivity of these spaces promotes movement and interaction of the students throughout the residence. 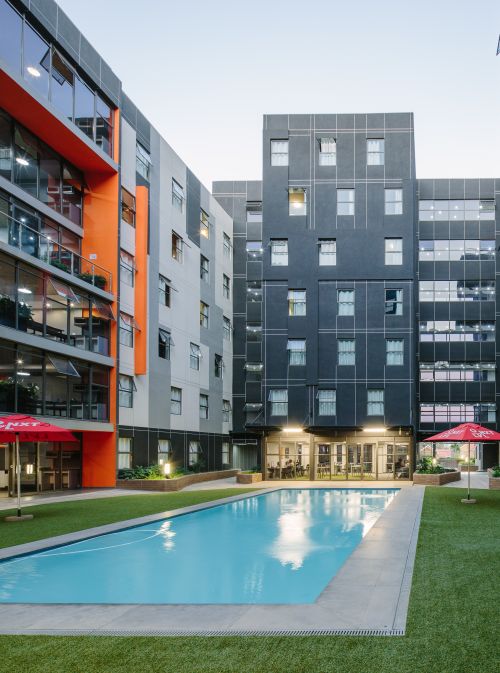 Several recreational facilities in each block is available, such as this large pool which encourages students to make use of what is available.

Clearly no detail has been left uncatered for. Everything within these buildings are aimed at students and their comfort, and ultimately with the goal to create a vibrant village and community. There are exercise areas, outdoor gatherings spaces amongst other bespoke student spaces. Each courtyard has its own identity and purpose and encourages movement through the spaces for students to study and socialise.

The interior designs were carefully planned, and it quickly becomes clear that a more modern look and feel was sought after. We tried to take in as much as possible, but at times were so distracted by certain features that it was quite a challenge to remain focused on everything around you. And rightly so – this means the designers did their job extremely well. 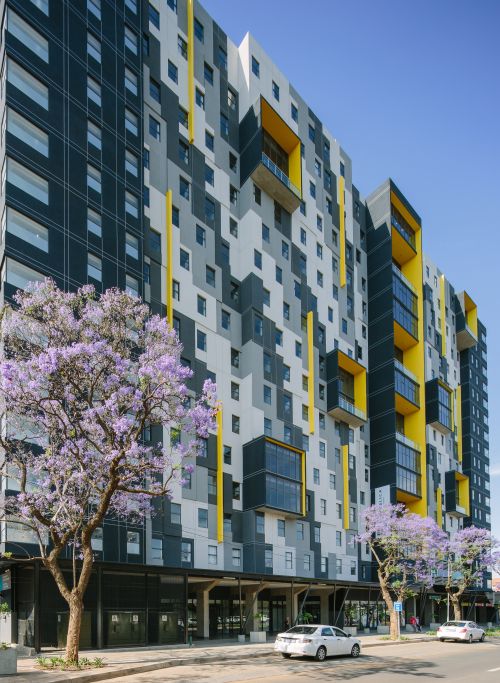 The monochrome tartan grid of the majority of the façade is juxtaposed with colourful pop outs and fins on the façade designating each neighbourhood in green, orange, blue and yellow.

Kloppers highlights the specific products they specified to build these blocks. Autoclaved aerated concrete (AAC) blocks were used as the main building material to optimise the construction process and reduce the total cost.

These are lightweight, with improved thermal qualities and fire resistance. As a result, all the internal walls are 110mm thick, as opposed to traditional 230mm brick walls – reducing structural loads while offering economic sensibility.

“The AAC blocks are quite large, easy to handle and fast to construct,” explains Kloppers. “These aerated blocks are made from a lime/silica mixture. The fire rating is six times that of a normal brick wall and the thermal rating is four times as much. This product is new to South Africa and Hatfield Square was the first project to utilise the material in the country.”

Due to the porosity of the AAC blocks, a normal plaster-and-paint finish could not be applied. An Exterior Insulation Finishing System (EIFS) from Terraco was used. This trowel-on finish is applied to the meshed and primed AAC blocks. Tape joints on the facades creates a tartan grid, highlighting the verticality of the design and also making future maintenance of the coating convenient.

“We wanted texturality both in colour and relief on the buildings themselves,” Kloppers adds. “The latter was achieved by adding colour-coded fins to the facades where the windows are close together, simultaneously acting as fire breaks. In other instances, extruded polystyrene blocks were fixed mechanically to the facade for added relief on the mainly monochrome exterior.” 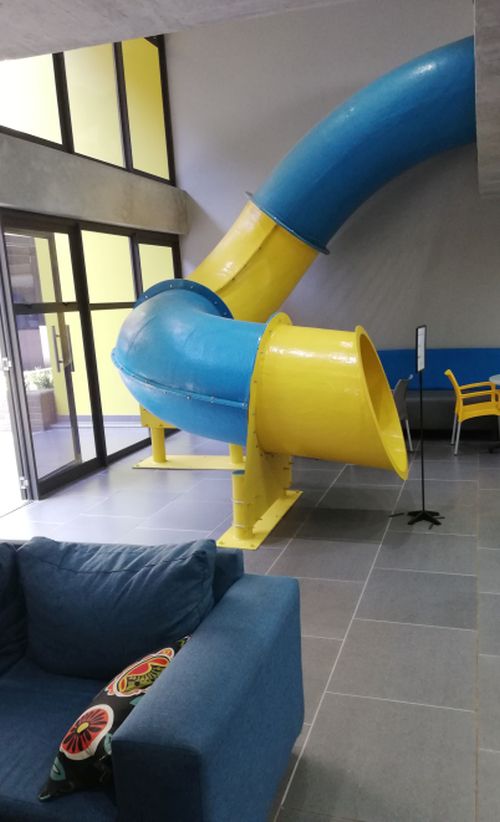 The project was completed in three phases. Blocks A and B are located closest to Hatfield Square, followed by Blocks C and then D; the latter being the tallest building in the precinct, and completed last. “In order to enhance the sense of micro-communities, the four blocks were colour-coded, with each building’s unique colour repeating through its floor plates as well as on its facades,” emphasises Kloppers.

Very passionate about universal access, Kloppers further explains that students and patrons with disabilities have been catered for by including accessible residential units, ablution facilities and barrier free circulation throughout the precinct and retail square. Accessibility and connectivity were key drivers, which is why pedestrian walkways were introduced on both sides of the precinct, seamlessly connecting nodes such as Hatfield Plaza and the Hatfield Gautrain Station to the University of Pretoria campus and residences. “With Block D completed, we are thrilled that the entire precinct is alive with hustle and bustle,” Kloppers comments. “We shaped this space to cater for both students and the general public, encouraging flow and interaction with a safe and universally accessible thoroughfare from Prospect to Burnett Streets.”

Kloppers is clearly passionate about what has been achieved, and rightly so. Yes, just like any other project there were challenges, but these were quickly and efficiently resolved. Students today are fortunate to have the option to reside in such all-inclusive residences – these are more than just rooms to settle in, they are villages that encourage community and collaboration, creating a safe and functional living and studying node within the greater city.

Acknowledgement and thanks go to Antoinette Kloppers, one of the Paragon Group’s Senior Project Architectural Technologists and Head of Building Regulations.